The  Peachland Rotary Club produces a series of free concerts dedicated to World Peace in Heritage Park at the Rotary Pavilion in the summer months.

Rotary  believes peace starts with the individual.  Our mission  inspires  people around the world to be at peace with themselves, others and their environment.  Rotary is a global community working towards peace.  One by one, two by two, all together  we can make the difference and change our world.
Our Peachland Club gives their heartfelt thanks to the public for their generous donations at our concerts.  We are all just ordinary people in a small community helping people in desperate need far away in the global community.  Rotary is the catalyst in making things happen.  View the recent letter from ShelterBox from the donations  collected at the 2018 Peace Concerts.

The dates of our Peace Concerts for the summer of 2020 are as follows:

All concerts begin at 6:00 pm with our food and beverage tent opening at 5:00.  As in previous years, audience donations will support the purchase of Shelter Boxes to be used around the world wherever natural disasters make families homeless.                                         Don’t forget to mark your calendars! Watch this space for more information and updates.

We now have the dates set for our Peace Concerts with the  entertainment beginning at 6:00 pm.   As usual, we will be providing food service and beverages prior to the concerts at 5:00 pm.  Don’t forget to mark your calendars! The dates are:

As in previous years audience donations will support the purchase of Shelter Boxes to be used around the world wherever natural disasters make families homeless. Here are some photos from our “Cod Gone Wild Concert”.

2018 Peace Concerts a Success Despite the Smoke!

The 2018 Peace Concerts were a challenge!  The July concerts went as planned featuring COD Gone Wild and Flint and Feather with sunny skies and warm temperatures.  August proved to be  the “smoky” month resulting in poor air quality due to smoke from the many fires around the province.  As a result, the Kelowna Opera concert unfortunately was cancelled over 10+ poor air quality which would greatly affect the throats and lungs of the scheduled performers.
The final concert, featuring Country Classics with Marty Edwards and Pam Ferens, with last minute planning, was re-scheduled to a week later and was moved to the Peachland Community Centre.
Many thanks to the good folks of the District of Peachland who offered the Community Centre as an alternative to Heritage Park in case of weather issues.
We decided not to take any risks and opted for “inside” which in hindsight was the right decision! An appreciative audience of over 230 gave Marty and Pam a standing ovation at the end of the performance and donated generously when the hat was passed.  Many thanks, Peachlanders!
The audiences, as in previous years, were generous in their donations going to purchase Shelter Boxes to be used around the world wherever natural disasters make families homeless.
We look forward to season  2019 at the Rotary Pavilion in Peachland with plans for a fresh and thrilling complement of musical performance.  Hopefully we will have smoke-free skies as well.
A big thanks to Marjolein for bringing a Shelter Box (and giving up time from her Sunday) to display and answer questions from inquisitive people at our first concert.  Here is a photo gallery from the July 15th concert showing the captive audience and our Rotary team offering our signature German Bratwurst and Smokies on a bun. As well a few photos from the final concert in the Community Centre of August 26.  Click on a photo to view it in full size.

Peachland Rotary presented another season of concerts dedicated to the Rotary International ideal of World Peace in Heritage Park in the summer just past.    Our audiences often topped  300 and were generous in their donations going to purchase Shelter Boxes to be used around the world wherever natural disasters make families homeless.  And so we look forward to season  2018 at the Rotary Pavilion in Peachland with plans for a fresh and thrilling complement of musical performance. 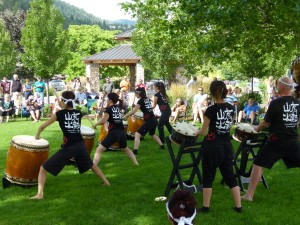 “We Get Things Done”

“Together, we see a world where people unite and take actions to create lasting change – across the globe, in our communities, and in ourselves.”

District 5060 Information and Map of Clubs

Currently weekly meetings are on Zoom due to the Omicron pandemic. Please note all outlined events and activities are subject to COVID restrictions at the time of the Event/Activity which could result in postponement, change of venue or cancellation.

Rotary Club Meetings are currently held weekly on Thursdays between the hours of 1:00-2:00pm on zoom due to COVID restrictions. If you're interested in learning about attending a zoom club meeting please email admin@peachlandrotary.com with your contact information and we will contact you.